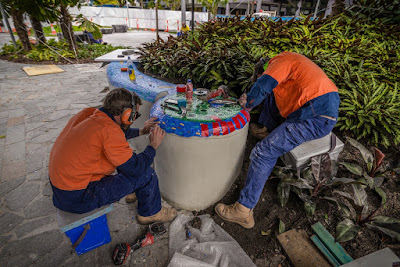 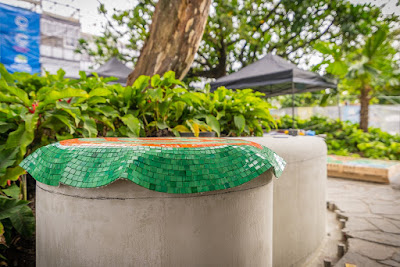 Over the last few weeks we have seen the lead up for the Shields Street Heart Mosaic project as the team prepared for the installation, which included exploring the translation of the imagery into the mosaic medium. This week The Orchid Group^ team experiences delays as the installation begins.

The project comprised of eight low walls divided into two sections.  Walls 1-6 were done in Stage I and walls 7-8 in Stage II.  The rendering of the walls in Stage I was completed in January but Stage II rendering, was not completed until mid-June as a colony of bats nursing their young, was residing in the trees above the site.  A Federal Conservation Act, restricted Council to continue with any works until the colony had moved away.

In the weeks after leaving the site in January, Don prepared detailed drawings capturing the three dimensional shape of the walls for the manufacturer.  To be commercially viable the majority of the installation was to be created in a controlled environment off-site however, the three dimensional nature of the project was proving a considerable challenge for the mosaic supplier.  Production delays forced Council to cancel their contract and seek the supply of the mosaics from another manufacturer.

The new supplier was similarly challenged with the three dimensional elements of the project  which resulted in large two dimensional panels being produced which greatly increased the amount of on-site stitching (the processing of cutting and laying one tile at a time to join two sheets) required to complete the project. Read the full story here.

Next time, we see the additional challenges posed by each of the walls as the team completes the installation.

Contact us on 1800 331 012 for technical support, arrange a demo, free samples, a trade event, or to discuss your next project or contact us here.

^The Orchid Group is also known as Symmetry Mosaics
Posted by LATICRETE Australia at 08:00